Best Places to Visit in the Secret Gem North of Greece

Not dramatic at all: the town of Drama

When the destination is called drama, you expect the worst. But the town is 3000 years old, nothing is dramatic here, at most the beauty of the picturesque village and the surrounding area. The 60,000-inhabitant city is located in a hilly landscape where wine and tobacco thrive, overlooking the 2000-meter-high Rhodope Mountains. Translated, the name means “place with a view” – that fits. Drama is a highlight in the Greek north.

In the center, the 600-year-old Agia Varvara Park with its bubbling springs that transform into canals and ponds and irrigate the ancient trees is particularly impressive. Among them are Greeks who are around the year and are watching their ducklings calmly swim by with their grandchildren.

Otherwise, drama is known for several events: every September an international short film festival takes place (this year for the 48th time), in the last week of May the wine festival “Draminognosia” rises and at the end of the year drama will go on for a whole month Greece’s famous Christmas city Oneiroupoli transforms.

You should definitely take a trip to the most spectacular stalactite cave in the country, about 20 kilometers away, through which flows the river Aggiti. The cave is about 13 kilometers long, about 500 meters are walkable alone, for other sections you book a guide.

In the evening you will return to one of the typical restaurants in the old town, where hearty home-style cooking is served – puff pastry filled with offal should definitely be tried, it tastes dramatically good!

Close to the border with Turkey: Alexandroupoli

The town is located on the ancient Via Egnatia, a Roman road, built in 146 BC. BC, which connected the Adriatic coast with the Bosphorus. Alexandroupoli is a well-tended harbor town near the border with Turkey, where sleepy dogs look after the few Bulgarian and Turkish tourists at the lighthouse on the harbor promenade. They can be enjoyed in the numerous restaurants by the sea fresh fish.

Alexandroupoli has some pretty little museums: by far the most beautiful is the Ethnological Museum of Thrace. In a neoclassical former home in the center, ethnologist Angeliki Giannakidou has assembled a comprehensive private collection on the history of the northern Greek region of Thrace. Sounds dust-dry, but is presented by leader Valentine alive and cool – history lessons are not better.

About 16 kilometers north of Alexandroupoli lies one of the most important ecosystems in Europe: the Evros Delta. With a size of almost 408 square kilometers, it is home to and resting place of more than 300 species of birds, including pelicans, swans and geese.

In addition, there are 46 species of fish and seven amphibians native, 21 reptiles and more than 40 species of mammals are still to be found. The visitor center is located in Traianoupoli and is a contact point for those who want to get very close to the birds and the impressive marshland nature.

A mini bus takes you out to the jetty, from where you can glide on small wooden boats through the shallow water. At the latest when a sandbank with hundreds of pelicans comes into view, the enthusiastic crowd attractively collects the cameras and smartphones.

The area may only be visited by trained guides. Registration required, from 10 Euro, evros-delta.gr

The end of the Silk Road: Soufli

In Soufli, a small community on the border with Turkey, the Silk Road once ended on European soil, where silk was bred for the first time on the continent. Almost all of the approximately 3800 inhabitants are still engaged in the production, sale and display of the delicate fabric.

There are only four museums involved in silk production. Here, for example, one learns how scrounged the silk moths are (favorite food: mulberry leaves), or that the hard work of silk production and processing in the past centuries was a matter for women, while men have always been responsible for sales and marketing.

The ladies and gentlemen are doing a good job today: you do not leave the city without at least a tiny silk scarf – and on top of that, the feeling, the caterpillar, who has to answer for the good piece to have known personally.

The Silk Museum of the Piraeus-Bank Cultural Foundation, housed in a neoclassical building from 1886, also explains the history of silk and its manufacture in German. Admission 3 euros, piop.gr 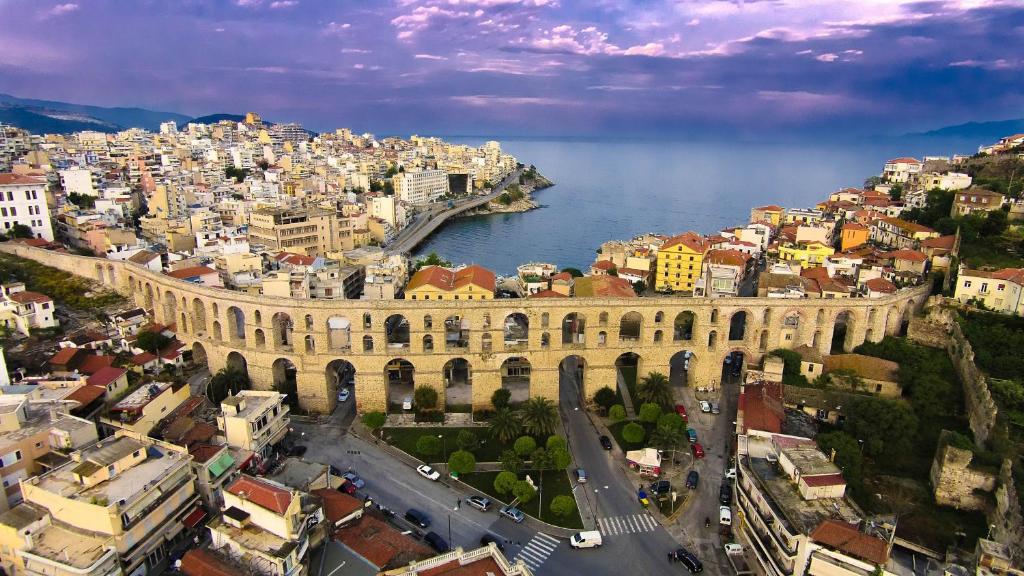 The bustling city by the sea appears in most tourist guides only for its airport and as a transfer station to the car ferries that drive the islands of Thassos and Samothraki. Kavala is a typical port city worth a visit, if not an overnight stay.

The landmark is the harbor with semi-circular, white-lit villas and neoclassical houses – a backdrop like an amphitheater. The city is around 2500 years old, so an ideal place for every visitor interested in history.

Founded in antiquity by inhabitants of the neighboring island of Thassos as Neapolis, the place later changed its name twice: in the Byzantine era, it was called Christopolis – Christ City. The place grew up to the important post office, where you changed the horse (Italian: cavallo). The city owes its name to this fact: Kavala.

The old town extends on a promontory; visible from everywhere is the fortress, built in the 15th century on the ruins of a Byzantine acropolis. Underneath, on the mountainside, an old Turkish quarter with steep alleyways, an ouzo tavern joins the other, cats lurking among the tables. Dating back to the Turkish period, the Imaret, a former poorhouse with 18 domes and several courtyards, is today a luxury hotel overlooking the sea – with a bit of luck it is even a bit dramatic.

Tips and information for Greece’s north

Getting there: For example with Aegean Airlines or Olympic Air via Athens to Alexandroupoli or Kavala. The bus and train connections on site are often irregular, so a rental car is recommended.

Best – The Spiritual Tourism in France