Between Magna Graecia and Moorish culture. The beauty of Agrigento - Best Places To Visit

Between Magna Graecia and Moorish culture. The beauty of Agrigento

A weekend in the best preserved Arab streets of Sicily, in Agrigento. Five names: Akràgas, Agrigentum, Kerkent, Girgenti, Agrigento. A thousand-year history of falls and rebirths. A walk through history through narrow lanes, courtyards and squares, between Arab and Norman architecture in search of what remains of one of the most flourishing centers of the Mediterranean founded in 581 BC. from Greek settlers.

The city develops around two hills, the Rupe Atenea and the Girgenti hill where the medieval center is located. We begin our walk from the cathedral founded at the end of the & #; XI century from the patron saint of the city, first bishop after the Muslim domination, San Gerlando. We pass by the adjacent Lucchesian library, eighteenth century, to get to the place where once stood the temple of Athena, the sixth century. A. C and which today is the seat of the Church of S. Maria dei Greci. Here you breathe an oriental air, the result of the Greek-Catholic rite that was originally celebrated in the church built on the ruins of the temple. A melting pot of sensations stratified in time that become even more concrete through the brief underground passage where the remains of the temple’s base are still visible, while part of the colonnade is incorporated by the perimeter walls of the church. 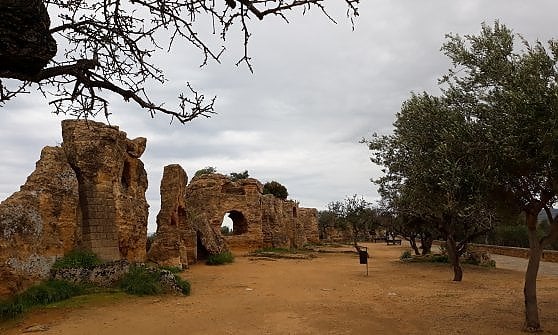 Valley of the Temples (photo by Anna Maria De Luca)

The street of cafes and restaurants is Via Atenea, the palpitating heart of the new and old Girgenti, ideal for stopping to enjoy some culinary specialties based on fresh fish, aubergine caponata, or meat dishes such as farsu magru, for do not talk about the famous Sicilian sweets. Speaking of taste, from 20 February to 10 March twelve restaurants take part in the Mandorlara, the “Almond-to-Table” feast with four-course almond menus at a promotional price of thirty euros. From the panoramic and near Viale della Vittoria, the valley and the sea are dominated. The nightlife, as well as in the center, develops in San Leone, famous for its beach. On the Via Atenea, it is worth visiting the College of the Filipinos, monumental complex of the beginning of the 18th century rIt has been recently restored and reopened to the public, which today functions as a cultural space and a picture gallery.
The fourteenth-century area of ​​Agrigento is dominated by the abbey of Santo Spirito, founded by the Chiaramonte family at the end of the 13th century. For art lovers, the Franciscan Minor convent, annexed to the Basilica, houses in the exhibition spaces below, FAM – “Fabbriche Chiaramontane, Arte Moderna Galleria Permanente”. Also worth seeing is the Casa Natale-museo – by Luigi Pirandello, located near Porto Empedocle. It is located in a country district, overlooking the sea, called “Chaos”, on the border between the City of Agrigento and that of Porto Empedocle. If you are looking for the famous pine tree of Pirandello, unfortunately you will not find it anymore: it was badly damaged by a storm in 1997.

Obviously you can not go to Agrigento and not visit the Valley of the Temples, UNESCO heritage, with the extraordinary Garden of Kolymbetra, known as “the pool of the gods”: saved from Fai after decades of neglect, is an earthly paradise that lies between the temple of Castor and Pollux. A significant part of Akragas, the city founded by the Greeks in the 6th century BC, derives its name from the pool, Kolymbethra, placed at the end of a network of water galleries built in 480 BC. from tyrant Terone (so says Diodoro Siculo), a tank that then became a fish nursery, frequented by swans and birds and which transformed the dry land into a flourishing garden of Mediterranean plants. Unmissable destination of the Grand Tour between the nineteenth and twentieth century, the garden ended in a state of neglect in the late nineties. Now it is a must to see in the Valley of the Temples. 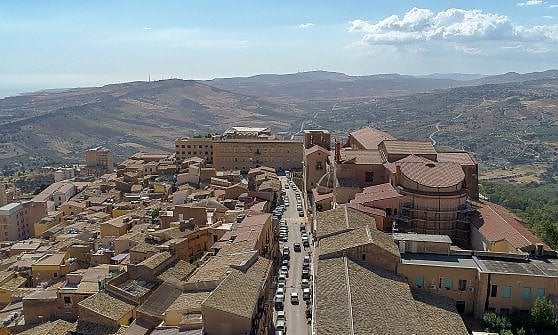 The via del Duomo immortalized with a drone

For a journey back in history, extraordinary are the finds kept in the Regional Archaeological Museum of Agrigento which, together with the archaeological park, is often the site of cultural events. If you are looking for an opportunity to go to Agrigento, the next may be the festival of the blossoming almond tree, which takes place when the Valley turns into what is called the “Valley of Paradise”: a cloud of pink petals of almond flowers . The 74th edition will open on the first of March: for ten days it will be a succession of talks, events, educational workshops, exhibitions, concerts, show cooking, Sicilian dances. A festival that weaves the history of the city (in the 60s there were about 200 thousand hectares of land planted with almond groves) to the legend around the almond blossom: a miracle of nature that still remembers the love of Fillide, princess of Thrace, for Acamante, son of Theseus. After waiting for ten years to come back from the Trojan war, not seeing him return with the victorious ships he let himself die in despair. The goddess Athena, moved, decided to turn Fillide into a beautiful almond tree. But Acamante was not actually dead, and when he learned that Fillis had been turned into a tree, he embraced him. To return the hug, Filice gave birth to flowers instead of leaves from its branches. A hug that is repeated every year when the almond blossoms announce spring.