THE largest tree in the world it has already been lit on Monte Ingino. A show, developed by man and surrounded by nature, based on 260 lights, 270 large lamps, 8500 meters of cables, 1350 sockets and plugs that carry 35 kilowatts of electricity. But in Gubbio the shape of the multicolor fir – 70 meters high and 350 wide, complete with a comet designed by 200 little lights – is only a co-star. Beyond the records (the tree has been in the Guinness Book of Records since 1991) what most seduces those who arrive in the “City of Christmas” is history, art and stones. History that can be read in the medieval system, among the alleys that become perfect scenography for the crib widespread in the district of San Martino. Of course, the most authentic corner of Gubbio that in these days houses the statues of the nativity, the shepherds, the craftsmen, the magi in real size. Not just dummies, but 120 characters from the Palestinian clothes that animate the medieval lanes and “chase” down to the Saonda stream as if they were there, doing the laundry, from the dawn of time.

A crib of rare charm that is “confused” with the life of an Umbrian town kissed over the centuries – say the same eugubini – by good luck. First the settlement of the Umbrians (pre-Roman people) who left evidence of its alphabet in the Eugubine Tablets (seven, in bronze, date back to the 2nd century and are in Palazzo dei Consoli); then the miraculous intervention of Bishop Ubaldo (Sant’Ubaldo patron saint of the city) who protected Gubbio from the joint siege of the Umbrian cities in 1151; therefore the proof of holiness of Francis who here met the ferocious Wolf and tamed him (near the Vittorina grove where today there is the church of the same name) and, finally, the most recent fortune: to have remained almost untouched by earthquakes that at more shots they have shaken the region (the most devastating in 1997 and 2016). 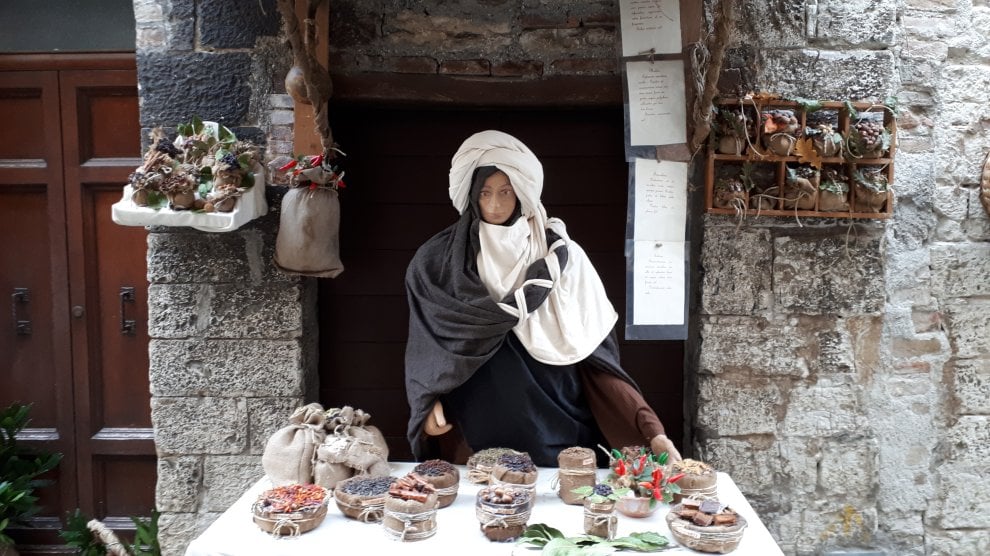 A destiny if not unique, very special that of Gubbio. Scaramantica “Città dei Matti” – of which anyone can have the honorary license by going around the small fountain of Largo Bargello three times – devoted to the Umbrian tradition, yet “different” for political farsightedness and artistic history. Yes, because here behind the ancient doors – that have defended it “from the other Umbria” of the signorotti and the “gradassa” Perugia, choosing to stay under the aegis of the Signoria Montefeltro until the annexation to the Vatican State – unveils climbing treasures urban planning (from the Middle Ages to the Renaissance) concentrated in a relatively small area at the foot of Mount Ingino. Palazzo dei Consoli, for example, symbol of the city, the Piazza Grande “hanging” at the top or Palazzo Pretorio, seat of the municipality. And the Duomo (of San Mariano and San Giacomo) and the Churches (to be seen that of San Domenico and San Martino) on which the spiritual guidance of Sant’Ubaldo reigns, whose remains “watch over” the city from the top of the Basilica-Sanctuary guardian of the wooden Ceri that parade in procession on May 15th. More than a tradition, it is a mission for local families to share the burdens and tasks of the ritual festival. 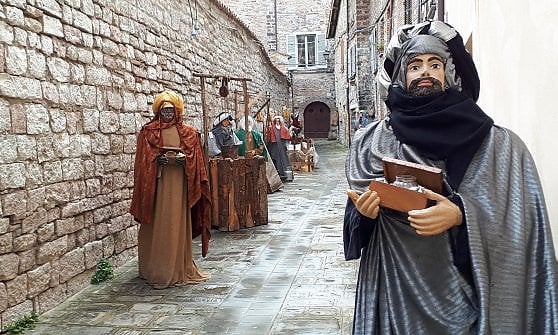 Holiness, art and sins of gluttony. Gubbio, monastic by nature, is hedonistic for natural progress. Just look at the Monastery of Sant’Ambrogio perched on the coast of Monte Foce, immersed in the green and austere sentinel of the city. It was a refuge for hermits as early as 1330 and even today access is regulated by the religious who live there. Pleasantly open to guests, however, the Park Hotel ai Cappuccini, a seventeenth-century monastery animated over the centuries by various religious communities, which has fallen into disrepair and has been brought back to life for a couple of decades. At the edge of the center, it is the ideal place to explore Gubbio and enjoy a relaxing spa after the mountain “climbs”. Salt pool, massages, doc treatments and a magical atmosphere composed of a skilful mixture of contemporary art and renaissance model rooms with fireplaces and high ceilings. A hotel, of course, but with unmistakable egubini connotations. Different from the usual, for Dna, also the beautiful garden that the winter temperature does not allow to fully enjoy. In contrast to the restaurant “Nicolao”, which welcomes you inside the maze of cloisters with a particular aroma of mushrooms and truffles of which this land is very rich.

Truffle King of every quality and color: it “hides” around Gubbio in every period of the year, change the types and the fragrance a bit, but the “treasure hunt” has the same appeal even in winter. One can be helped by one guide to have better luck or opt for a quieter art tour. Until January 8, the crib of San Martino may be one more reason to reach Gubbio. It will not disappoint you.

We are not a party, we do not seek consensus, we do not receive public funding, but we are standing thanks to the readers who buy us every morning at newsstands, look at our website or subscribe to Rep :.
If you are interested in continuing to listen to another bell, perhaps imperfect and some irritating days, keep doing it with conviction.

Things Editors Like: T Suggests: A Store With a Mushroom Garden, a New Detroit Hotel and More