Hong Kong, Bangkok and London.. Here is the most visited cities in the world - Best Places To Visit

Hong Kong, Bangkok and London.. Here is the most visited cities in the world

From a city break to a vacation, urban destinations always generate attractiveness for tourists, and this is reflected in the number of visitors they receive and the high hotel occupancy they experience year after year.

Euromonitor International, the global research company based in the United Kingdom, has just published the Top 100 City Destinations 2018, its annual ranking of the most important cities in the world in arrival of international tourists.

Broadly speaking, the report highlights that 7 of the 10 most visited capitals on the planet are Asian, 2 of them European and another, North American.

Among the cities that experienced the most growth in the last 12 months, those of Turkey stand out -recovered from a turbulent 2016- and three more that appear for the first time in the ranking. Son Batam, in Indonesia, Santiago de Chile and Porto, that like Portugal – the best tourist destination in the world in 2018 -, it became a place on the international scene.

Next, the top ten of this year based on last year’s visitor arrivals and estimates of this:

Hong Kong remains, once again, with the award to the most visited city in the world. It is estimated that almost 30 million tourists -29,827,200 will visit the region before the end of the year.

Aerial view of the central district of Hong Kong, in China.

This former British colony, now a special administrative region of China, is formed by a peninsula and several islands located on the southern coast of the South China Sea, in the Pearl River Delta, 100 kilometers southeast of the city of Canton. and east of Macao.

With a population of over 7.3 million people, it is the fourth most densely populated state or sovereign territory in the world and one of the most important financial centers on the planet, with the highest score of the financial development index.

One of the latest news was the inauguration, a month ago, of the The longest maritime bridge in the world, a structure that facilitated even more the arrival of visitors from the continent.

The bridge links Hong Kong with Macao, as part of a much more ambitious plan that is to integrate regions with special status to the rest of the country.

Forecasts indicate that the exotic capital of Thailand will receive before the end of 2018 a total of 23,688,800 arrivals of foreigners.

The temples are one of the main attractions of Bangkok.

Bangkok has grown enormously in recent decades, transforming itself into the political, social and economic center not only of Thailand, but of Indochina and Southeast Asia. His influence in art, politics, fashion, education and entertainment, as well as in business, has given him the status of a global city.

With a population of almost 9 million people and a “big Bangkok” of 12 million, the city went from a population almost exclusively Thai to a very cosmopolitan mix with increasing western influence and inhabitants from India and China.

London is the European city preferred by international tourists. It is expected that by the end of the year 20,715,900 tourists.

The River Thames crosses the center of the English capital.

The report asks, however, the effect that Brexit (the exit of Great Britain from the European Union) can have on future tourism. And it poses deficiencies in its traditional infrastructure, beset by capacity problems.

“The capacity of the airport is limited, and discussions about its expansion take more than 50 years, and in June 2018, the Government finally gave its support to a third runway at Heathrow, which will not open until 2026. Meanwhile, Crossrail was promoted. as a game change for land transport. ”

The vast majority of 18,551,200 tourists who chose Singapore in 2018 will have been able to enjoy not only the attractions of an ultra-modern city, but also the multi-award-winning Changi airport, considered the best in the world. 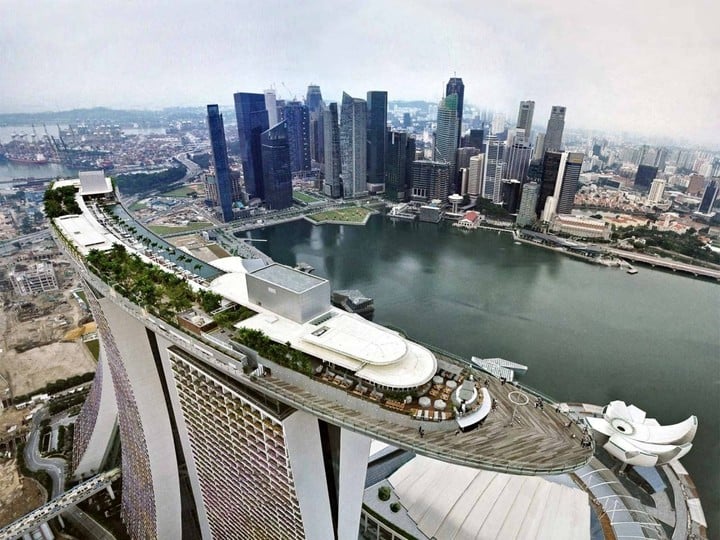 Pool in the sky: the hotel Marina Bay Sands, in Singapore, and its particular pool on the edge of infinity.

One of the busiest attractions in the city is the Orchard Road shopping district: in 2005, and to attract more visitors, the Government legalized the game and allowed the construction of casinos and resorts in the area of ​​Marina South and the island of Sentosa. To compete with regional rivals such as Bangkok, Hong Kong, Tokyo and Shanghai, lights began to be used on the facades of the buildings, so that the center would become a more exciting place.

Gastronomy was also promoted as an element of attraction, especially with the Singapore Food Festival every July, and in recent years the destination also grew as a center for medical tourism: it is estimated that more than 200,000 foreigners visit each year to get medical attention .

The Chinese city this year will have attracted 18,931,400 travelers who arrive to discover the Portuguese legacy, a colonial jewel with period buildings and European architecture mixing between east and west design. The historical center of Macao is Patrimonies of the Humanity.

Casinos and hotels light up the Cotai strip in Macao. (Bloomberg)

With impressive casinos and large high-end hotels, this former Portuguese colony is now a special administrative region of the People’s Republic of China. Among the places to explore are the ruins of San Pablo, the façade of a 16th century Catholic church that is now a UNESCO world heritage site, and the Guia Fortress.

The city of light is the second European city and the sixth in the world with more touristss international. In total, in the French capital will be accounted for at the end of December 16,863,500.

Despite the terrorist attacks of 2015 and 2016, the city managed to recover and does not lose visitors. Hoteliers and gastronomic providers were concerned this weekend with the violent riots generated by the “yellow vests”: we will have to see how this affects the tourist flow.

The capital of one of the 7 Arab Emirates is consolidated as one of the most visited cities in the world, with a forecast at the end of 2018 16,658,500 tourists.

In recent years, the growth of the city was vertiginous, and it became a central tourist destination, especially for shopping.The city boasts many notable constructions and infrastructure works, such as luxury hotels Burj Al Arab and Burj Khalifa – the highest in the world, with 828 meters – the ports of Mina Rashid and Jebel Ali, and the housing complex of artificial islands The World and The Palm Islands.

The city of skyscrapers is the only American city that appears in this year’s Top 100 City Destinations. And is that New York continues to be one of the most important destinations on the planet, with 13,500,000 expected arrivals.

13 and a half million tourists will visit New York this year.

In March 2017, the travel restrictions imposed by the then incoming administration of Donald Trump threatened a chilling effect on international tourism. Then, NYC & Company launched the marketing campaign “New York City: Welcoming the World”, to highlight the opening of the city to international visitors.

And the Big Apple remained one of the most emblematic and popular destinations in the world, despite its rather high prices: the City Planning Department reported that 67% of all hotel rooms in 2017 were classified as “of luxury”. And this shortage of affordable housing gave rise to short-term private rents.

The spectacular nature of the Malaysian capital will have attracted 13,434,000 travelers from the rest of the world at the end of this year.

The city was founded in 1857 at the place where the Gombak and Klang rivers converge. In fact, in Malay, its name means, literally, “muddy confluence.”

With almost 2 million inhabitants and a metropolitan area of ​​7.2 million, it is the largest city in Malaysia and the official residence of the king, the Istana Negara. And globally known for its Petronas Towers, the tallest twin buildings in the world.

The top ten of the most visited cities on the planet during this year is closed by Shenzhen, thanks to the 12,437,300 tourists who will have passed through the town before the end of 2018.

The dizzying growth of Shenzhen filled the skyscraper landscape.

Shenzhen, baptized as “the city of the millionaires“From China, it is located in the southeast of the country, in the Pearl River Delta and bordering Hong Kong.

And it’s all a symbol of China’s economic transformation, with a thriving commercial center, a cluster of startups and large technology companies. Shenzhen was until only 39 years ago – and as it had been since about 1,700 years earlier – a small village farmers and fishermen. Today has 10 million inhabitants and 49 buildings over 200 meters high, while another 48 skyscrapers are under construction.