La Romana is a province in the East of the Dominican Republic, famous for its cane sugar production, it is 90 minutes from Punta Cana and 90 minutes from Santo Domingo. It is one of the most important tourist destinations in the Dominican Republic. It is characterized by its great influence in tourism and by being bordered by beautiful beaches and towns, home to Casa de Campo, one of the largest and most comprehensive resorts in the Caribbean. It also has Altos de Chavon, Cueva de Las Maravillas, famous golf courses, tourist ports where cruise ships dock, a major international airport and marinas. Bayahibe and Dominicus, are two wonderful fishing villages belonging to the Province of La Altagracia, near La Romana. Despite being such a small country, 29 beaches in the Dominican Republic proudly display their Blue Flag status, becoming the Latin American nation with the highest number of certified beaches. Dominicus Beach was the first to receive a Blue Flag in America. These places are earthly paradises with a beach of white sand and crystal clear waters, so beautiful that it is hard to believe that they exist. The climate of La Romana is wonderful, has an average temperature of 26 gr C, ideal for bathing on the beach every month of the year. La Romana is one of the most internationally renowned Dominican cities, despite being one of the youngest in the country. Its urban development begins in the first decades of this century with the establishment in the town of Puerto Rico Sugar Company, which establishes the largest sugar mill in the private sector, the Central Romana. The city quickly became populated with Puerto Rican immigrants and English-speaking Antillean islands, who developed a town with its own culture. 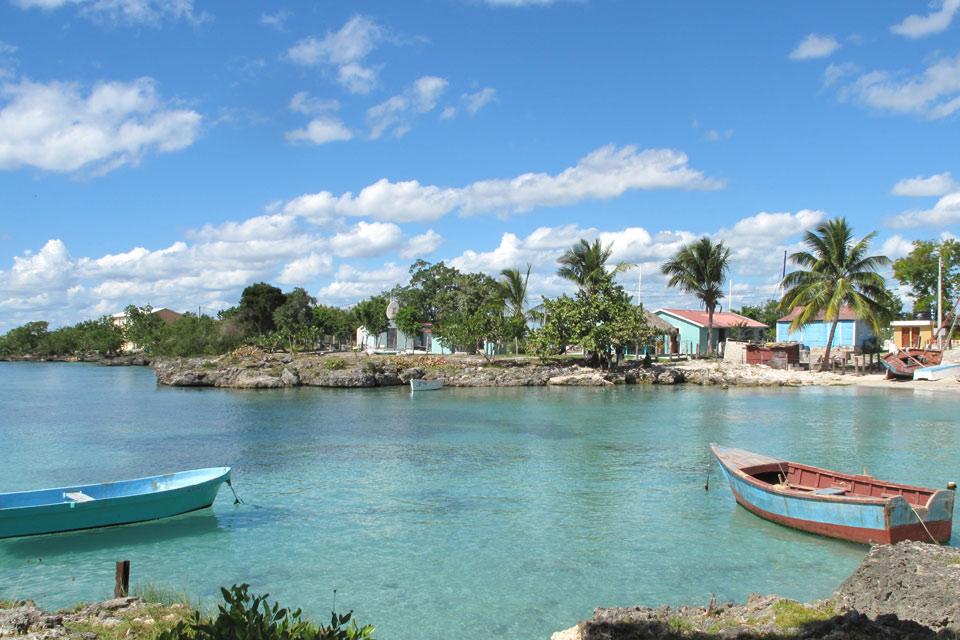 La Romana was a prosperous sugar port, until the 1970s, when Gulf & Western developed Casa de Campo, one of the most famous resorts in the world. The city owes its name to an ancient Roman scale of great size that in the sixteenth century was used to weigh the goods that passed through the port, very important at that time, and owned by a family originally from Rome.

The fact that there are so many places called “bateyes” exist in its political division in La Romana. The reason for this phenomenon is that most of the provincial territory is dedicated to the sowing of sugarcane. The bateyes are colonies of braceros that settle down in places located properly for the management of the agricultural work of the sugarcane. In the bateyes there are houses and facilities for agricultural work, such as storage centers, scales, etc.

Also called The City of Artists, Altos de Chavon is another of the wonderful tourist attractions of La Romana, is a replica of a medieval village, built in stone and gives a colonial air that dazzles those who visit, Altos de Chavón has the most prestigious school of art and design in the Caribbean. This design school has an affiliation with the “Parsons School of Design” in New York, which gives more preparation to graduates. a place where art is breathed, a community of artists dedicated to cultural exchange, a work of great architectural value, which evokes the creative spirit. At the edge of a Canyon that flows dramatically into the Chavón River, we find the home of the Amphitheater of Altos de Chavón, one of the most outstanding scenarios in the world, where important international artists have performed outdoors such as Frank Sinatra, Sting, Elton John, Carlos Santana, Heart, Spiro Gyra, Duran Dura, Juan Luis Guerra, Placido Domingo, Jennifer Lopez, among other great stars.

Previously called Cueva Jagual, Cueva de Las Maravillas in incredible tourist value, known for its ancient paintings made by the Taino aborigines. Inside the cave you can see about 500 paintings on the walls and engravings where black and red predominate, made by the Tainos, ancient inhabitants of the island and extinct. It has 10 petroglyphs, that is, engravings on the rock, and 472 pictographs, that is, paintings on the walls. Of these 472 pictographs 144 were classified as enigmatic or abstract and 69 of capricious groupings of points. In addition you can see 135 pictographs with human face, 18 animal, 41 human and animal, 18 geometric and 38 geometric and human. The attractions offered by the wonderful cavern are: the Pictographic Gallery, The Mirror of Water, which consists of an artificial lake that reflects the top of the cave and the Great Panel as a mirror, in the latter you can see a rock painting created by the taínos, which represents a funeral ritual, among others.

Bayahibe and Dominicus are two coastal towns belonging to the La Altagracia province, but due to their close proximity to La Romana and similar coastlines, they are associated with this province. Bayahibe and Dominicus were rural fishing communities, with spectacular white sand beaches and crystal clear turquoise waters, on its shores are important hotels such as the Iberostar Hacienda Dominicus, Viva Dominicus Beach and Palace, Catalonia Gran Dominicus, Be Live Canoa, Dreams The Roman. The local people are hospitable and lived from artisanal fishing, humble dwellings, modern hotels and floristic endemism (Pereskia quisqueyana or flower of Bayahibe) are conjugated. A place where hundreds of tourists sail daily to enjoy the paradisiacal beaches of Saona Island. On the transparent beaches of Bayahibe and Dominicus guests can easily move to the Catalina and Saona Islands to observe the virgin and protected areas of the Eastern National Park. In June 1999, the Saint George ship sank 35 meters deep in front of the Viva Resorts (Club Viva Dominicus and Club Viva Dominicus Palace). The sinking seeks to recreate a protected habitat for marine flora and fauna, thus preserving the environment of the area. This artificial reef can be visited by tourists from the area.

Bayahibe is a bay of beauty that surprises those who visit it. From its shores depart the boats of hikers that visit Isla Saona and Catalina Island. In addition to its beautiful beaches with soft white sand, it also has abundant coral reefs populated by fish, molluscs and crustaceans, the terrestrial area with mangroves and areas susceptible to be cultivated. The first time that Europeans visited the Bayahíbe area between September 14 and 15, 1494. Cristóbal Colón, who had been exploring the islands of Cuba and Jamaica, during the course of his second trip to America, decided to recognize the southern coast of Hispaniola. On September 14 he arrived at Labanea Island, giving it the name of Catalina in honor of the daughter of the Catholic kings.

Nowadays, Bayahibe has set aside fishing as the first activity to dedicate itself fully to the tourism industry. As of the year 1990, organized excursions to the National Park of the East began, which departed from the town and logically the boats were navigated by the inhabitants of the place. The arrival of the big hotels diversified the activities of the population, which largely already work in the hotel zone or have businesses related to the visits that the tourists of the hotels regularly make in the picturesque town.