Mega Cruise: Big, bigger, Miami, The “Grandeur of the Seas”

More than ten million passengers, hundreds of thousands of jobs: on Florida’s coast are the largest cruise ports in the world. But the boom has dark sides.

When the alcohol comes, that’s a sure sign: soon the anchor will be released. Until then, not only does it have to carry all passengers and their luggage on board, but also the fuel that gets the Caribbean vacationers going: Budweiser, Corona, Jim Beam. Every minute, fork-lift trucks push new pallets into the belly of the cruise ship. Nobody seems to be surprised that one could make a complete town drunk with this crowd – the colossus is a complete small town: 300 meters long, eleven decks, space for almost 2500 passengers.

With these dimensions, the ship is still relatively small. Port Miami, the largest cruise port in the world, is used to other dimensions. The floating hotels, which dock there, hold significantly more than 4,000 passengers. Last year alone, more than 5.3 million people boarded Miami, followed by Port Canaveral with 4.5 million and Port Everglades with 3.9 million passengers. Even in the successful cruise industry, such numbers stand out.

There are cameras, border police and detection dogs in the harbor, but no sewage treatment plant

In the ports themselves, the boom means above all one thing: work. Hundreds of employees load luggage, empty containers, clean portholes, check boarding passes. Every morning in Miami, a whole truck-mounted convoy sets up to dispose of waste and feces – its own sewage treatment plant, as is already commonplace in Europe, does not yet exist at the world’s largest cruise port. But cameras, explosives detection dogs and officers of the American border police, who are looking for illegal immigrants, traffickers, drug couriers. It beeps and rattles and clatters in this sea-soaked environment. The delivery vehicles drown out the gulls.

Of all the noise the passengers hardly get anything. They enter the ships via mobile bridges, their luggage is screened, much as in the airplane. “And yet there is a difference,” says Richard de Villiers, a longtime docker. “People still have the feeling of going on vacation here, and no one on the plane is wearing a blazer today, but cruising is still paying attention to etiquette.” That’s not quite true; The percentage of Hawaiian shirts in the terminal is considerable, but access to the port seems to be slower than at the airport. A look at the skyscrapers of Miami, a photo, just no hassle.

Richard de Villiers has known this microcosm for decades. The 48-year-old now works in the higher management of the port – in 1986 he started for $ 5.50 per hour in the service area. “I’ve received complaints about lost luggage,” says de Villiers. Not the most rewarding job, but an instructive start. De Villiers attributes Miami’s number one position to passenger numbers today: proximity to the Caribbean, accessibility to the airport and location factor (several major cruise lines, including Royal Carribean and Carnival Cruise Line, are based in Miami ).

“If we are honest, luck is part of the success,” says de Villiers. As late as the 1960s, Miami was so bankrupt that the city sold the port to the county. To him the terrain belongs to today, whereby the entire region pulls together for a long time, in order to keep the maritime economic engine going. In 2014, a new car tunnel was opened, which connects the port to the highway network and relieves the congested city center. Cost: one billion dollars. In addition, more will be added to the existing seven terminals. The newest is being built by Royal Carribean for $ 247 million and will house the largest cruise ship in the world this year.

It looks similar at Port Canaveral, 350 kilometers north of Miami. Construction work is also in full swing there, so that by the end of 2020 a seventh terminal can be opened. The “master plan” for the next 30 years even envisages four completely new terminals. Estimated cost: $ 2.5 billion. 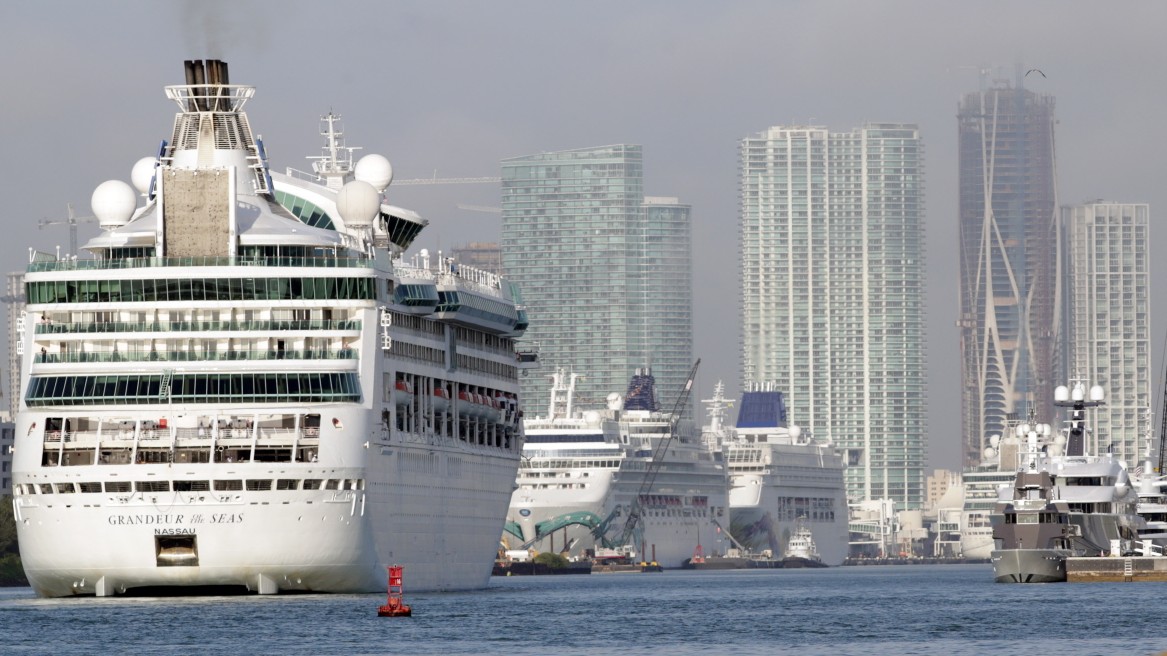 Environmentalists fear for the coral reefs

That the construction costs are so high, is related to the weather conditions in Florida. Tropical storms are part of everyday life; In Miami, there are still countless motorboats in front of the cruise ship terminals, which were destroyed by hurricanes in 2017. “But holidaymakers need not be afraid of that,” affirms Richard de Villiers. “As soon as a storm sets in, the cruise ships are the first to leave for a safe place, and no one would risk damaging those billionaire ships, and they can not even get a scratch.”

The port administration is more concerned about other things. “We think about security around the clock here,” says de Villiers, pointing to a police boat patrolling the cruise ships. Since the terrorist attacks of 11 September 2001, security measures have been tightened extremely. “Most of the tourists do not notice, because we do not want to scare them,” says de Villiers. But sometimes it just can not be avoided. For example, a police dog recently sounded the alarm on a travel bag. Fortunately false alarm: “It turned out that it still traces of black powder stuck because the owner had been hunting with it,” says de Villiers. Florida is one of the US states with the laxest gun laws. No wonder the security industry is booming. But not only that: after the airport of Miami, the port is the most important economic factor in the region. In Cape Canaveral, the Port Authority estimates that nearly 22,000 jobs are on the cruise and cargo business; According to the industry association Clia, the cruise industry generates just under 150,000 jobs throughout Florida. Depending on the calculation, even more. The Port of Miami, for example, claims to be responsible for maintaining some 324,000 jobs, including sectors that are indirectly docked.

But what is good for the economy does not make nature happy for a long time. In 2014, there was a massive coral extinction off the coast of Miami. A study by scientists from the US Marine Protection Agency NOAA named the port as the cause. More precisely, the deepening of the access channel through which the seabed had been thrown up over two years. The shipping companies are not always as environmentally conscious as they claim in their glossy brochures. In 2016, Princess Cruise Lines was fined $ 40 million by a court in Miami. The ships had illegally disposed of oil-contaminated water in the sea and falsified reports.

“We’ve lost more than 80 percent of our coral since 1970,” says Rachel Silverstein, director of the environmental organization Miami Waterkeeper. The mud and the contaminated soil, which were created during the port development, would have literally buried many corals. “This reef is not only extremely important for our ecosystem, but also a major economic factor,” emphasizes Silverstein. After all, many tourists come to Florida to find an intact nature. “People want to surf, dive, swim, they want and need a living ecosystem.”

In those ports, those responsible weigh them down. “We spend ten percent of our total construction budget on environmental protection,” says Richard de Villiers. The “coral thing” was sad, but perhaps also due to other factors, such as the rise in sea temperature. Also in Port Canaveral one prefers to talk about other things. “Starting in 2020, we will be the first Florida port to refuel ships with liquefied gas,” says Bobby Giangrisostomi, director of the cruise industry.

Addressed to the environment, Giangrisostomi’s main concern is the “fantastic landscaping” of the port: a private beach for cruise passengers, along with a fishing spot and restaurants overlooking the water. Ecological problems? “The pollution of the seas is bad,” sighs Giangrisostomi. Travelers could see some dolphin sculptures made from plastic waste found on the beach in the harbor lookout tower.

While Port Canaveral already has the deepening of its access roads behind it, this is still going on elsewhere in Florida. The competitors have also long ago announced that they want to follow suit: more terminals, more ships, more passengers. For example, Port Everglades is planning its own deepening project for $ 374 million. The environmentalist Rachel Silverstein does not believe in anything good. “We finally have to learn from our mistakes,” says Silverstein. “It can not be that even state authorities warn of the consequences of such construction and yet they are simply pulled through.” Who is right in the end, is open. One thing is certain: the cruise industry is continuing to grow. In 2018 she expects a new passenger record.

travel informationGetting there: Direct flights to Miami z. With Swissair from Zurich, from 650 euros, www.swissair.com. Many shipping companies operate a shuttle service to the port. Taxis charge $ 27 (around € 23.50) for the trip from the airport to the port (plus tip).

Port: The Port of Miami is located at 1015 North America Way. The harbor in Cape Canaveral can be overlooked from an observation tower, 670 Dave Nisbet Drive. Admission: $ 6.50 plus taxes, www.explorationtower.com.

Vatican Museums evaluate putting a limit on the number of visitors