Naples, the Cinque Terre, the canals of Venice: here are the UNESCO sites that risk disappearing by 2100 - Best Places To Visit

Naples, the Cinque Terre, the canals of Venice: here are the UNESCO sites that risk disappearing by 2100

From the Alexandria Lighthouse in Egypt to the medieval city of Rhodes and the statue of Zeus in Olympia, Greece, up to Petra in Jordan: that the destiny of the wonders of the world is to be canceled by natural disasters has always represented part of their charm . But today, to challenge this fatality, we should think about the climate commitment, signed by 55 states in the world in Paris in 2015, to reduce emissions and limit the increase in temperature.

The canals of Venice, the baroque cities of the Val di Noto, the picturesque views of the Cinque Terre and the medieval lanes of Ferrara: even before tourism, these jewels of Italian heritage are threatened by natural disasters. In fact, there are thirteen sites in Italy, declared Unesco heritage that could disappear by the end of the century, erased by the erosion of the coasts or floods due to the rising of the sea. The historic center of Vicenza, Naples, Ferrara, Ravenna, the Cinque terre, and then Genoa, Pisa, the archaeological site of Pompeii, the Amalfi Coast, Syracuse, Venice, the site of Paestum and the Val di Noto.

From Venice to Pisa, the 13 Italian UNESCO sites threatened by global warming

A study published in the magazine is about to denounce the situation Nature Communications, coordinated by Lena Reimann of the German university of Kiel. The research photographs the state of forty-nine UNESCO sites, near the coast, in sixteen Mediterranean countries: among these, Italy hosts the highest number of marvels at risk. After her follow Croatia, with six sites, and Greece with three. Among the Italian places in danger, the city of Venice stands out in first place, which, as underlined by the research, remains the only UNESCO site to be protected from rising water through a system of barriers. “Once the Mose is completed – the research document reads – the risk will be reduced considerably, because the system of mobile barriers will protect the city and the lagoon from high water up to three meters”. 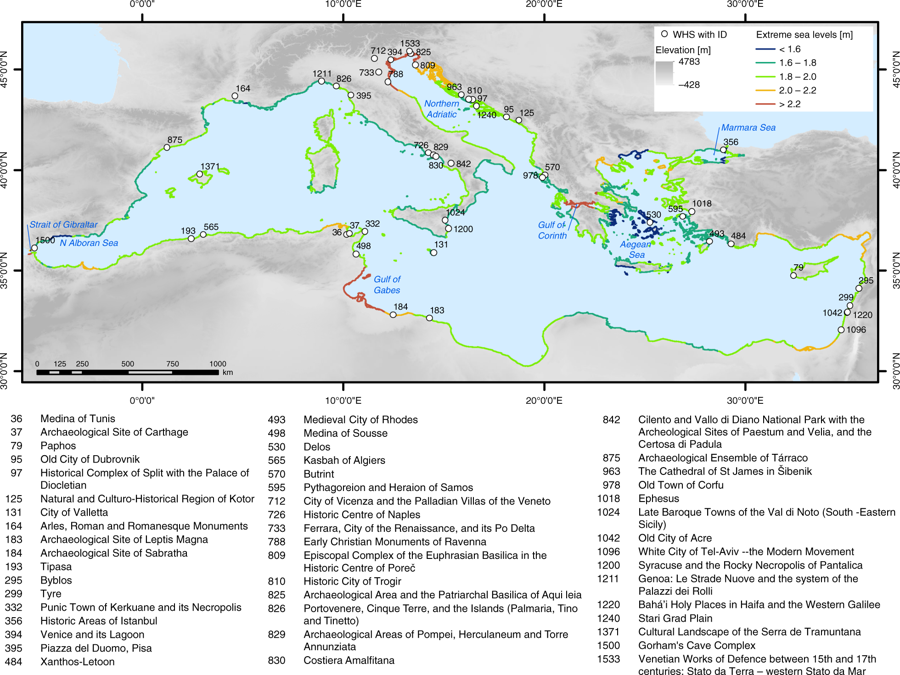 Overall, according to the research I am 37 places, facing the Mediterranean, that risk being hit by a flood in the next hundred years, while 42 are threatened by coastal erosion: some run both risks. Only two places in the basin, according to the research of the University of Kiel, for now would save themselves from these threats: the oasis of the city of Medina, in Tunisia, and the archaeological site of Xanthos-Letoon, in Turkey. The research also points out that by 2100 the risk of flooding could increase by 50% and the erosion risk by 13%.

To safeguard UNESCO sites, researchers at the University of Kiel encourage the use of artificial barriers, which do not damage the aesthetic profile of places, or natural ones, for example by restoring coastal ecosystems to stem the sea’s progress. Necessary efforts, concludes the research, but useless without a global commitment to respect the Paris agreement, to avoid our modern version of the myth of Atlantis.

We are not a party, we do not seek consensus, we do not live on public wages, but we stand thanks to the readers who buy us every morning at newsagents, look at our website or subscribe to Rep :.
If you are interested in continuing to listen to another bell, perhaps imperfect and some irritating days, keep doing it with conviction.

Two Ryanair planes almost collide in the air near Pamplona