Mexico is a colorful country that you can find many adventure while travelling. Real de Catorce San Luis Potosi is one the unforgettable taste you can discover in Mexico. In the desert, there is a village where it is said that everything is magical and has healing powers, especially if you live in a big city.

In 1778 began the stage of greatest splendor in Real de Catorce. Its mines, together with those of Zacatecas and Guanajuato, were until the 20th century leaders in the extraction of silver. From 1910 the exodus of inhabitants began, of 15,000 there were only 300; currently they are a little over a thousand.
Typical

You can make your trips on foot, by car or you can rent horses to enjoy the scenery of the mountains on the way up to Cerro Quemado (Burned Hill), a sacred place for the Huichol people.Take time to visit the ghost town, Ogarrio tunnel, and the Concepción mine.

Actually this healing, magical town offers you is peace, tranquility, quiet moments alone to walk along the cobbled streets and to wander around historical lands such as the Parroquia de la Purísima Concepción, the mint, the arena, and Plaza Hidalgo, which will envelope you in a mystic ambiance. Every year hundreds of people come in prilimage to Wirikuta, a sacred area . 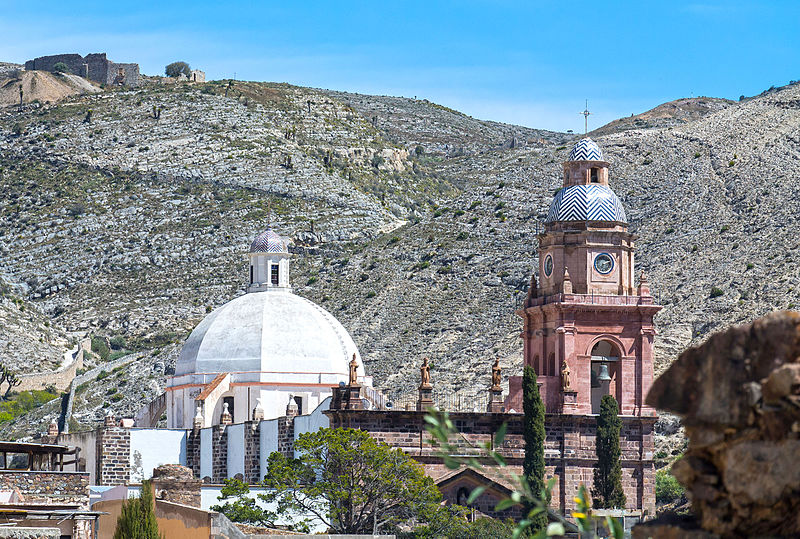 photo by Wikimedia is licensed under the Creative Commons Attribution-Share Alike 4.0 International license.

This stone town still preserves vestiges of that silver bonanza that lived more than one hundred years ago. Real de Catorce is forged from this mining culture and also from the Huichol culture. The mysticism is breathed in the ghostly walk of its visitors and in the proximity with Wirikuta, sacred area to which each year hundreds of people make pilgrimages. In addition, being in one of the highest areas of the central highlands boasts one of the best views of the country.

There is feast day of St. Francis of Assisi in October. Hundreds of people can see retablos, religious artworks that give thanks for miracles acted inside the church In spring, at the Temple of Immaculate Conception.  Real de Catorce was a Mexican ghost town before it there is silver mines. There are many places worth to travel, from the old bullring to the impressive Tunnel of Ogarrio.

Best to do for a great experience is to hiking the surrounding area’s beautiful trails, that you’ll find overlooks of Real de Catorce and remains of different mining towns.

The Panteon de Guadalupe build in 1775, and one of the oldest buildings in the region. Marvel at the giant hill that is home to the back part of the structure. Once you have passed through the main arch, stroll along the long path divided by stone walls.

Real de Catorce was the second biggest silver producer on earth. The exploitation of 50 over mines led to the rise of Real de Catorce and since the 19th century.

San Lıis Catorge is believed to be magical place In the desert and has healing powers, especially if you live in a big city. Here the landscapes are unbelievable and you can enjoy a wonderful view of the mountains.

With an extension of 2.3 kilometers long, it is the main access to the town. It was opened in 1901; before that, the village was almost unattainable. Inside it keeps a chapel that usually goes unnoticed by foreign eyes.
Parish of the Immaculate Conception

It has a neoclassical style with Doric elements; its austere cover is made of quarry. Here is “Panchito”, a San Francisco de Asís dressed as a charro, who is greatly venerated. Their parties are in the month of October and they summon pilgrims from all over Mexico.

It was built in 1770 by the Franciscans and is one of the oldest buildings. Its facade is simple and has a semicircular arch, flanked by sober towers of a single body. In the grid there are flowers that represent the peyote, a sample of the syncretism of the place.

The first is an unbeatable place to contemplate the panoramic of the place, while in the palenque all kinds of shows and activities have been presented, from cockfights to artistic and cultural events, which continues today. Both are pink quarry constructions dating from the nineteenth century.

A real peaceful and silent place. You can spent time by yourself in the area. It is the heart of the village, surrounded by trees, shops and restaurants.

The museum presents miner’s life and tools fom the past. There are many records about the life of the miners of yesteryear. In this museum, tools, photographs and other curious objects found in mines and old buildings are housed.

Area as huge as 140,000 hectares and has a great biodiversity, which is why it concentrates the greatest wealth of cacti per sqm of the planet. Wirikuta is also the desert in which peyote sprout,

In this place the sunborn for the Huichols, which is the equivalent of the birth of the world. To celebrate, the Huichols travel here from countrywide-they come from Nayarit, Jalisco, Durango-and perform worship rituals, in which the consumption of peyote is of great religious importance.